I have a growing addiction. It’s not one likely to kill me, not alcohol or drugs, and not one that is likely to see people avoiding me in public. It’s an addiction that only a few people will have known about, but one that I’ll happily talk about with anybody.

As a child, I loved Lego. It’s a great method of exerting creativity and just having a bit of fun. In my teenage years I stopped playing with it altogether…and then I turned 30. My (then new) partner, Lori, had always loved building Lego and after a while she decided to buy me a Lego Darth Vader. My first new piece of Lego in probably 16-18 years.

I was a bit dubious to how much I’d actually enjoy building it as a grown man, but one Lego model turned in to two, then three, four, five, and so on. I was hooked. I’d become determined to build as many of the Star Wars characters as I could afford to – only the characters from the Dark Side, mind…they’re just ‘cooler’, I guess – and I loved it.

Lori had gone from being the Lego addict to suddenly being the person looking on at me saying, “Even more Lego?!” How times had changed.

So what is it about Lego that has made me spend a huge amount of money on it? What is it about those small plastic bricks that make me (and Lori) feel the need to travel to Sheffield every few weeks so we can visit the Lego store and, most likely, spend more money? 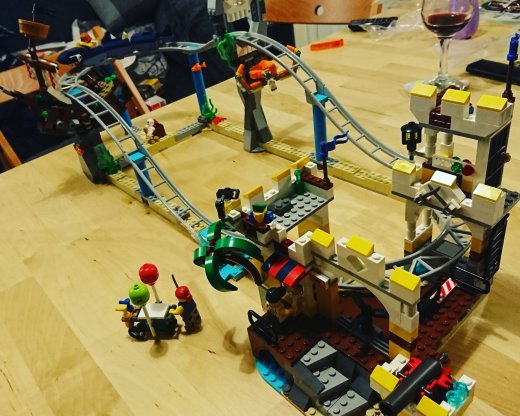 For myself, it’s a mixture of things. Firstly, I love building it. I love seeing what starts as a small plastic piece turn in to a fully sized model – be it a character, a car, a building or something different altogether. But then there’s a deeper reason.

I’ve discussed in previous blogs that I have a few coping mechanisms that I use to help me through my own issues; be it anxiety or low mood…or anything else, for that matter. I’ll play guitar, I’ll write, I’ll go for a walk. These are things I do, but each one has a blocker associated to it. If it’s late at night, I can’t start playing punk rock on the guitar because I’ll wake the house up. If the weather is bad, it’s not always feasible to go on a long walk. Sometimes, you can sit at a screen all night long with the thought of wanting to write and then nothing comes. Each blocker brings it’s own frustration…if you’re stressed and you can’t do the thing that unwinds you, you won’t calm.

And why do we do these things? Why do we go for a walk when we’re stressed? Why do I play guitar? Simply, it occupies the mind. It fills the mind with something completely different, helping to switch off and unwind and think about something unrelated.

If I can’t write, I can grab one of my Lego sets. If I can’t play guitar, I can get some Lego out. If the weather is bad it doesn’t matter…I can build Lego anywhere I like from the comfort of my own home. And, as with any of those other mechanisms, Lego unwinds me. I find it therapeutic. It switches me off. Any stress I’m feeling, it goes away when I start building. And the more complex the build the better. The sense of accomplishment from finishing an ‘Expert’ set is akin to the sense of accomplishment I get from learning a new song on guitar.

I’m not alone with this feeling, either. If you Google for “Lego Therapy” you’ll find endless links talking about the benefits of using Lego, links for therapy classes for disabled and autistic children, therapy classes for people suffering with anxiety. Yes, Lego is a toy…but it’s a toy that gives back. A toy that helps. A toy that isn’t necessarily just for kids.

When I look through my own collection, I love my Star Wars sets. My BB-8, a gift from Lori, was a build that took over 6 hours and the mechanism with it, the movement of the head and the internal ‘lighter’ is just so incredibly clever and was a joy to put together. My James Bond Aston Martin is wonderful – the detail to it is sensational. The Beatles’ Yellow Submarine looks as good in Lego, if not better, than it did in the film. These are builds that remain stood on display, builds that I look at and feel proud about. Builds that took time but were worth it. Worth every penny, worth every minute.

There will be many people that probably won’t get it; won’t get past the riding impression that Lego is a toy for children…and I get that. Less than three years ago, I was on that boat. But I would encourage people to try it. Buy a mini-kit, give it fifteen minutes, see if it takes your mind off things. You may enjoy it!

I’ve had several friends talk to me about buying Lego for their kids and as the kids get bored building it or following instruction, the adult continues and they get wrapped up in it. They have to finish it. Nobody likes leaving things half done, do they? And it’s in these moments I’ve had a fair few come to me and say, “I get it now.”

Finally, Lego gives me something to look forward to with my own children. My little boy is already playing around with Duplo. As he grows and maybe starts playing with Lego, it gives us something we can do together as father and son. Something that isn’t just football or music or, even further on, drinking…something that can be ours. Projects we can start and finish together. Our own little accomplishments.

But if not, and my boy or daughter don’t get in to Lego, that’s still okay. It’ll still be there for both Lori and myself. We can still keep having our frequent trips to the Lego store in Sheffield. We’ll still keep building. Piece by piece. Brick by brick.